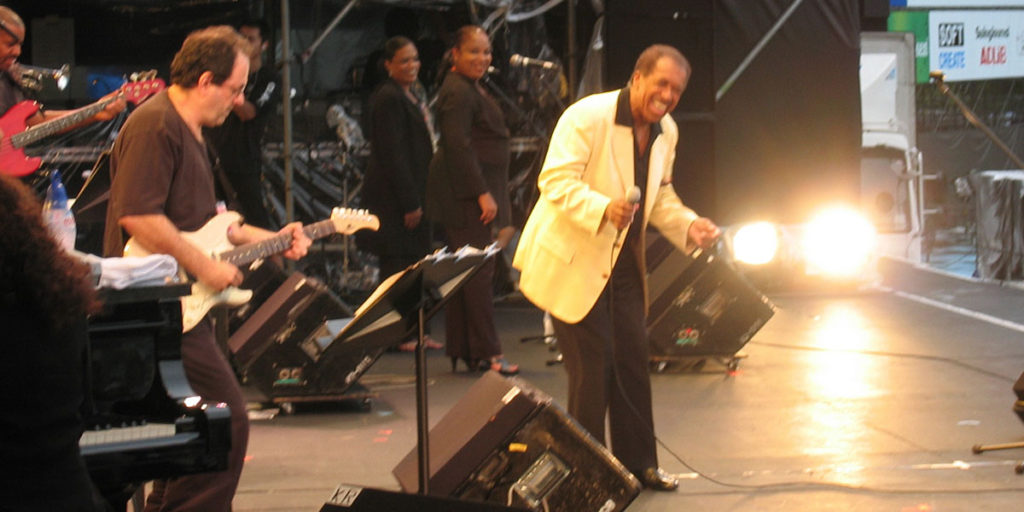 Last week we said goodbye to Ben E. King. There was a wake Wednesday night, and a powerful and beautiful service on Thursday morning. So many friends, family, and musicians gathered to celebrate his life, mourn his passing, and say farewell.

I worked with Ben E. King for almost 25 years. I was his Musical Director/Band Leader for the last 19 years. When I first met him he was still a young man of 51, which was younger than I am today. I have spent the greater part of my adult life and professional career working next to Ben E. During that span we played 1000 shows together in every conceivable venue from small clubs and private parties to theaters, parks, arenas, stadiums and racetracks. We did TV shows and radio broadcasts. The band ranged from quartet to the standard R&B band with horns, to Jazz style big bands, and pops concerts with 60 piece symphony orchestras.

We were always there to accompany Ben E. King, a consummate professional whose repertoire included some of the most enduring popular songs in American musical history. His anthem, of course, is “Stand By Me”, an iconic song instantly recognized worldwide. Other pop standards originated by Ben E. include “This Magic Moment”, “Save The Last Dance For Me”, “Spanish Harlem”, “There Goes My Baby”, and “I Who Have Nothing”. He continued to record until very recently, and as I always loved to say when introducing him onto the stage, Ben E King’s career touched seven decades-an incredible achievement!

Ben E had a singular voice, a great combination of high range clarity and low range power and most importantly, he was always certain to communicate the lyrics of the song and to draw the listener in like a great storyteller. From a musician’s point of view, he loved to work off the rhythm section, his phrasing in the groove with the band. His intonation was superb. His delivery often seemed effortless, devoid of flash or superficiality.

As a performer and artist, he treated every gig with respect. He never took a gig off or for granted; they all mattered. A classic case was a fall festival in Alexandria, Virginia many years ago. We drove in a van to the venue to find a large field with a stage, some surrounding vendors, and numberless pumpkins stacked up everywhere. Unfortunately, the event was poorly attended. Nonetheless, undaunted by the pathetic turnout, Ben E. performed as if there were 10,000 people there. That was a very important lesson to learn. (For years we humorously dubbed any gig that was a failure as a “pumpkin fest”)

Another great part of working with Ben E. was the opportunity to work with so many superb musicians. Our New York- based touring band and pick up bands in the US, Europe, Japan, and the Caribbean all provided so many great experiences meeting and playing with great musicians. In addition, so many special guest artists sat in with us, and worked on the same bill with us. I saw a virtual history of Pop, R&B and Soul. I know that many of my friends on FB are people I met during my tenure as guitarist and Musical Director for Ben E.

One of the great privileges Ben E. graciously afforded me was opening his shows with a short set of two instrumental pieces (original music written by me, or written with saxophonist Tim Hegarty). It was a tremendous experience to go out into a major venue and have to command the stage and draw the audience in with music they had never heard. The band got to stretch out and warm up the crowd, the soundman got a chance to get the mix right, and we set the table for Ben E’s arrival. I often would be the one to introduce Ben E. and bring him onto the stage. I always loved to talk to the crowd and hear the applause as he came onstage. Every time Ben E. arrived the energy in the room was electric.

There were so many highlights working with Ben E. I still remember the first show I did in Boston in 1990 at the Boston Commons on an outdoor stage playing to thousands-the electricity when the bass began the familiar line to “Stand By Me” was amazing. Many trips to Japan, “The Today Show” in 1992. The Clinton Inaugural Ball in 1993. Pops concerts starting in 1996 with 60 piece symphony orchestras throughout the US and Canada with arrangements done by the brilliant Stan Applebaum. Several week-long engagements at The Blue Note in New York, including recording a live “small” big band CD in 2000(arranged by Tim Ouimette). Most recently, last August, playing in front of 20,000 singing in the streets of Senigallia, Italy.

I spent a lot of time with Ben E. the man. We did a lot of work together and occasionally had our differences about an issue relating to business or the band, but once we resolved the issue Ben E. was always true to his word. And, it was always great fun to hang out with him apart from business. . He had a lifetime of great stories to tell, and tremendous perspective on what mattered to him.

I felt comfortable discussing difficult personal issues with him, and he often had practical advice to share. Last December Ben E. played a series of gigs in New Jersey for Tim McLoone’s excellent charity, Holiday Express, that brings music and joy to many who need their spirits lifted during the holiday season. Ben and I spent a lot of time driving to these gigs and hanging out in the dressing room. We had a lot of time to talk, and he was reflective, open, and very candid. We shared a lot of good laughs too. It was the closest our friendship had become. When I dropped him off at his home late at night after a wonderful performance at The Count Basie Theatre in Red Bank New Jersey on December 18th, 2014 I did not know it would be the last time I would see him…

Just a few more words about Ben E: his most important priority was always his family, his kids and his grandchildren. He was always happy to talk about their achievements, he was very proud of them. He was a very private man, he really eschewed the trappings of celebrity, he didn’t like to schmooze, to be seen, to do the big hang. He probably could have played his legend up and had even greater public success if he played the celebrity game, but it was not him. He liked music, he liked the groove.

I had a lifetime of experiences working with Ben E. King. I am grateful for all of that and I will miss him.

In closing, I never grew tired of playing “Stand By Me” a song that Ben E. King shared with the world and will live on forever.